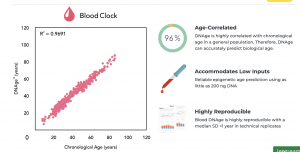 This service looks very interesting, however it seems to be mostly geared towards other businesses and researchers as there is no pricing information on the website, only a contact form. I believe that Zymo Research is the only company that has rights to the Horvath Clock testing procedure.

The fact that the test can be conducted with urine samples is very promising. This means consumers can easily extract and ship their own samples to be tested, which would hopefully mean lower costs and the possibility of frequent tracking. Imagine continuously tracking your epigenetic clock while experimenting with different fasting regimes or anti-aging supplements / drugs (NMN, metformin). Perhaps we can expect smart toilets to monitor our rates of aging in the near future.

The "Horvath Clock" measures chemical modifications to the genome that don't alter the DNA sequence. These "epigenetic" modifications regulate gene expression and the loss of epigenetic information is thought to be the cause of aging, according to David Sinclair's Information Theory of Aging,  By using statistics and machine learning, epigenetic markers can be correlated to chronological age in a general population and give an estimate of an individual's biological age. The Horvath clock also correlates to all-cause mortality, which roughly means it can predict how long you will live.

What epigenetic factors are in the clock?

The Horvath clock looks at DNA methylation incidences at 353 locations of CpG dinucleotides (sequence where G follows a C). It appears the DNAge test does not use histone modifications as inputs at the time of this writing.

The Horvath epigenetic clock is a much better test of biological age versus telomere length.

Telomeres are sequences of DNA that act as the protective end caps on strands of DNA in our chromosomes. As we age and cells divide telomeres get shorter. Telomere length has been used to predict biological age and there are even consumer facing companies that provide this service. The problem is the correlation between telomere length and chronological age in the general population is not great (roughly r= 0.5, maximum possible r is 1). Compare this to Horvath's epigenetic clock that has a correlation of r = 0.96 (for females).

DNAge's biological clock estimate depends on the patient's sex. The correlation between DNAge and chronological age is also slightly stronger for females vs males, which is interesting. Possibly could relate to the variability hypothesis or perhaps just a non-significant issue.